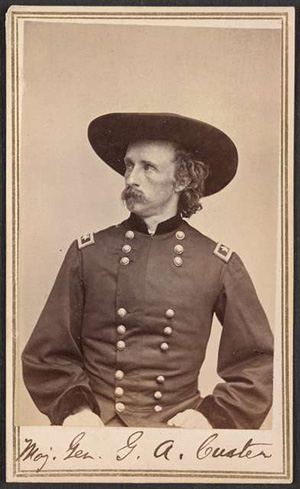 Who would have thought that then young soldier “Autie” would become a Brigadier General at the age of 23 – especially after he graduated last in his class at West Point?

And it wasn’t his long blonde locks, perfumed with cinnamon oil, or his dapper appearance that caught the eye of the Union Army. Autie, better known as George Armstrong Custer, was a bold and aggressive soldier who stormed to the front of the charge. None of this lollygagging in the safety of the rear flanks. The fearless “Boy General” had such courage and passion that he insisted that his face would be the first that the enemy would encounter. 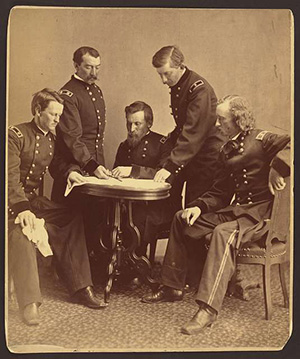 In the Civil War, where he relentlessly pursued the Confederate Army of Northern Virginia at the Battle of Gettysburg, he was ultimately rewarded when the table that the terms of General Robert E. Lee’s surrender was signed was gifted to Custer’s wife, Libbie, in recognition to Custer’s service to the Union Army.  And, by the way, it was Libbie who gave George his nickname of Autie. Who knows what special meaning it had between the two of them.

Considering that General Custer’s enduring fame comes from the Battle of the Little Bighorn, it would be easy for us to assume that he was born and raised in the untamed West. Actually, George was born in 1839 in New Rumbley, Ohio and was sent out to southeast Montana in 1876. Eventually his mission was to be part of a three-pronged attack on a large tribe of nomadic Native Americans, encamped along the Little Bighorn River. 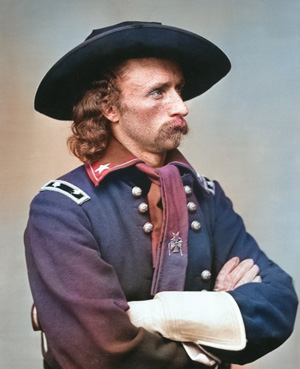 His confidence and death defying zeal led him onto the battleground too early and it turned into a one-pronged attack. In a flurry of determined Native warriors, General Custer and all 208 of his soldiers were engulfed and died in a battle that lasted a single hour. Of the toll, George lost his two younger brothers, a nephew, as well as Libbie’s brother. The only creature still alive when the dust settled and the blood stopped running was a solitary wounded Union horse, which was tended-to and brought back to health.

George Armstrong Custer, decked out in black velvet, gold lace, a red scarf and his signature wide-brimmed sombrero, was only 36 years old when he left this life on the Little Bighorn River.